If you want to learn more about the History of Granite then you have come to the right place!

The term granite is derived from the Latin word “granum” which means ‘grain’ due to its granular nature
although for the Italian term of granite is from the past participle of granire which means to granulate or make
grainy.

Granite is a very hard, crystalline, igneous rock primarily composed of feldspar, quartz, orthoclase or
microcline accompanied by one or more dark minerals. It is visibly homogeneous in texture. It is the most
common plutonic rock of the Earth’s crust, forming by the cooling of magma (silicate melt) at depth.

Large granite bodies may have formed within earth’s crust by intrusion of new magma or by the re-melting of
igneous varieties of crustal rocks. The evolutionary history of granite can be revealed by examining the
chemistry of successive layers of its large constituent crystals, notably zircon. Granite is formed by the
recycling of deep crustal rocks as mantle magma rose through them, rather than by re-melting the ancient,
shallower crust, as was widely believed.

Granite is typically medium to coarse grained, occasionally with some individual crystals larger than the
groundmass forming a rock known as porphyry. Granite can be pink to dark gray or even black, depending
on their chemistry and mineralogy. Outcrops of granite tend to form tors, rounded massifs, and terrains of
rounded boulders cropping out of flat, sandy soils. Granite sometimes can occur in circular depressions
surrounded by a range of hills, formed by the metamorphic aureole or hornfels.

Granite is nearly always massive, hard and tough, and it is for this reason it has gained widespread use as a
construction stone. The average density of granite is 2.75 g•cm-3 with a range of 1.74 g•cm-3 to 2.80 g•cm-3.
The word granite comes from the Latin granum, a grain, in reference to the coarse-grained structure of such
a crystalline rock. For this reason granite is used as a building material in the form of granite tiles and granite
slabs for wall cladding, roofing, flooring, a variety of other interior and exterior applications and especially for
counter tops, kitchen work tops and vanity units and is the most popular material for monuments and
memorials. Granite has a prominent place among dimensional stones on account of its hardness, resistance
to weathering, capability to take mirror polish, fascinating colours and textural patterns.

Despite being fairly common throughout the world, the areas with the most commercial granite quarries are
located in the Scandinavian Peninsula (mostly in Finland and Norway), Spain (mostly Galicia and
Extremadura), Brazil, India and several countries in the South end of the African continent, namely Angola,
Namibia, Zimbabwe and South Africa. 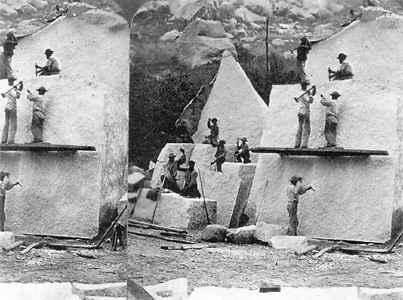 Granite is quarried across the globe since there are very few quarries which have mining machinery, mining
for granite is a manual job which uses hand chisels and hammers for drilling.

Years ago, excavating granite was a timely, laborious process that included the use of a significant amount of
explosives and a lot of manual labor in the drilling process. Today, diamond wire saws and slot drilling are the
primary activities used to complete the job, making granite more economical for consumers, as well as a
cleaner, safer and significantly less labor-intensive excavation process.

Granite quarry is a pit or some open excavation from which granite is obtained. To obtain granite from a
quarry digging, cutting or blasting process is used. This process of obtaining the stone is called quarrying.
Once quarrying is done, the processing of granite starts.

Granite quarries are laid out based on the direction in which the granite will break the easiest, providing the
maximum benefit that can be attained from the natural seams and structure. By using these natural seams,
the maximum yield can be obtained from the quarry deposit, thus reducing the amount of stone produced that
is not suitable for use as dimensional granite.

The types of natural fractures that can be seen in a granite deposit are based on their relationship to the flow
lines, as well as the surface of the granite deposit. Sheeting joints run roughly parallel to the topographic
surface at various levels beneath the surface; longitudinal joints are steep cracks that run parallel to the flow
lines; while cross joints are perpendicular to the flow lines.

Granites are now mined in most of the Indian states for use as construction material and road metal but
production of dressed granite blocks and slabs from Andhra Pradesh, Karnataka, Rajasthan and Tamil Nadu
are highly priced. In India there are 43 granite processing units of which 12 are in Andhra Pradesh, 13 in
Karnataka, 3 in Rajasthan, 14 in Tamil Nadu and 1 in Orissa.

The recovery of marketable grade granite is reported to be 32 to 40 per cent in Karnataka, 25 to 75 per cent
in four quarries around Jalore, the main granite mining centre of Rajasthan, and 20 to 40 per cent in Tamil
Nadu.

Over the years, granite has developed from a largely structural material affordable only to the wealthy, to a
stone that has numerous applications — counter tops quickly becoming one of the most popular — and
greater availability and mass appeal. One of the reasons for this increase in accessibility is the advance of
technology used to quarry the stone.

With new technology it minimized the costs thus bringing granite into homes all across the world. Whereas in
the past, excavating granite from a deposit required an elaborate process of drilling, pounding, sawing and
blasting, now — with the use of diamond wire saws, which look like wires, but are covered in diamond
segments — quarry workers are able to saw whole blocks of granite in a faster and more streamlined manner.

Granite is available in a wide variety of colors, including white, black, pink and red. The varying percentages
of quartz, feldspar and mica account for the rock’s color, veining and crystallization, making each granite
deposit unique. The high presence of quartz can account for many of granite’s color variations, as quartz can
be milky white, rose, smoky, yellow or amethyst. Feldspar, another one of granite’s main minerals, can
account for a glassy white, blue, green or red appearance. Finally, mica can contribute to a black, green, red,
yellow or brown appearance.

How granite slabs are created

Granite is more than just a pretty face. The stone is second only to diamonds in hardness, which accounts for
the effectiveness of diamonds in facilitating the quarrying of the natural stone. It is granite’s toughness and
durability that make it such a desirable counter top material. It won’t break or crack, and it is virtually scratch
and stain resistant.

Cutting granite at the quarry

Once the granite is removed from the earth, it needs to be cut to size accordingly. This is typically done with
wire saws that are often treated with a varying range of abrasives from sand to aluminum oxide to diamond,
along with water which acts as a coolant. Other types of cutting devices are often used in tandem, or in the
absence of, these wire saws. Water jet cutting, for example, uses a focused, high-pressure stream to cut
stone along specified cutting lines. Once it has been established that the granite blocks are to be used for
counter tops and tile, they are cut and polished into the familiar forms for these purposes. The granite tile and
slabs are calibrated to ensure that the thickness of the granite is uniform and gauged to make sure that they
are square; tiles are beveled to produce their smooth edges. Once this part of the process is completed, they
are ready for your project.

There are four operations that are involved in the processing of granite. They are:
• Dressing
• Cutting/Sawing
• Surface Grinding and Polishing
• Edge-Cutting-Trimming.