The use and history of marble in architecture dates back thousands of years to ancient Egyptian and Mesopotamian cultures.

Capable of bearing immense weight, marble was ideally suited for monolithic columns and supporting structures in public, private, and religious buildings.
From the richly coloured red floor of the basilica of Saint Paul in Rome to the walls of the Palace of Versailles, to the elaborately designed nave of England’s Salisbury Cathedral, marble has been used in some of the world’s most awe-inspiring buildings. The Athenian Treasury, built in the sixth century BC, was the first building constructed entirely of marble. The Parthenon, erected by Pericles in the same period, was built to be the beacon of the Acropolis. From miles away, incoming ships sailing through the Mediterranean could see the shining Pentelic marble columns of the most famous temple in Athens. The Parthenon still stands today, a testament to the resilience of one of the world’s most luxurious building materials.

Although the word “marble” originates from the Greek, marmaros, meaning “a snow white and spotless stone,” marble can be found in a rainbow of colours. Nowhere is this more evident than in Islamic architecture, where intricately patterned mosaics made of marble, stone and glass are used as wall decorations.

And because no other stone offers the opportunity for refinement quite like marble, it has been the medium of choice for some of the world’s greatest sculptors. The most famous, Michelangelo, carved David from a single block of marble. Architects have also taken advantage of marble’s unique features, incorporated iconographic details and marble portraits into building design.

Modern technologies have enabled home designers to take advantage of slab marble’s beauty and elegance without being burdened by its high cost. 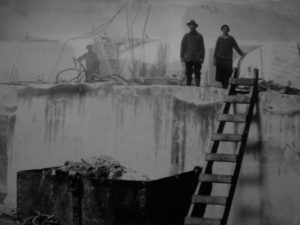 Cultured marble, a blend of ground marble, colorants and polyester resins, is manufactured at a price comparable to pre-fabricated and mass-produced acrylic. Cultured marble has many other benefits over slab marble. It is far less cumbersome and much more versatile. It can be molded into almost any shape, and is commonly used in the manufacturing of bathtubs, whirlpools, vanity tops and fireplace mantels. In addition, it can be colorized to match any decor. The advent of cultured marble makes luxury affordable and brings the rich history of marble into any home.